Well, here we are. The 25th season of Minnesota Girls High School Hockey is upon us. And everyone is wondering “Can the Edina Hornets do it again?”  Edina is the two time defending Class AA State Champ and Head Coach Sami Reber literally does nothing but win titles.  She’s never NOT won a State Championship.  Can Reber and the Hornets keep it going?  They lose a ton of scoring from last year.  Out are Oden and Fidler.  Dartmouth commit CC Bowlby is a threat from anywhere and will pick up right where she left off.  Can Princeton commit Annie Keuhl step up and pick up some of the slack?  I think she can and will.  Add to them a move-in in junior Katie Davis, a Harvard commit, and you have an all Ivy first line that will be among the best in the state.  And perhaps the smartest!  Edina coach Sami Reber will be looking for Minnesota commit, Tella Jungels, and Harvard commit, Hannah Chorske, to capitalize on their chemistry together to add to the scoring punch.  That duo can make 1+1=3.  Add to T. Jungels and Chorske, the underrated Olivia Swaim, and you have a first line at just about any other school in the state.  Swaim could be this year’s Aliyah Lance.  Rounding out the forwards will be sophomore Kylie Roberts, a Boston University commit, junior Lucy Bowlby,  sophomore Gwen Hendrickson (who is as nifty as anyone below the face off dots in the offensive zone), and freshman Jane Keuhl.  That forward group is DEEP! 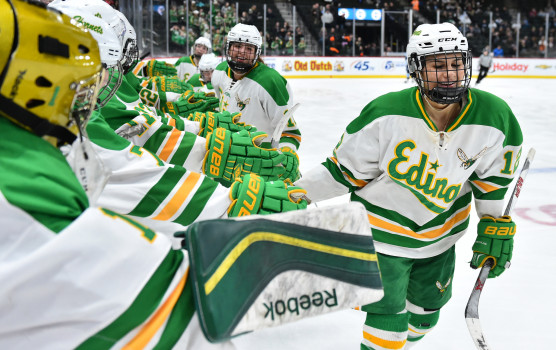 On the defensive side of the puck Edina lost goalie Megan Smith and defensemen Brooke Tucker, Eva Hendrickson, and Savanna Atol.  With that being said you can make a strong argument that the D corps will be even stronger this year. The biggest question is who will settle in as the starting goalie.  But, honestly, it doesn’t matter, when you take into account you have returner Mallory Uihlein, a Penn State commit, Evelyn Adams, who can skate with anyone, Sophia Doll, who made the All-Tournament Team as a sophomore, and newcomers Vivian Jungels, Lily Hendrickson, and Hailey Maxwell. Vivian Jungels is a freshman Minnesota commit and arguably the best 03 defenseman in the country.  Lily Hendrickson, a sophomore, is smart and tenacious, and Haley Maxwell, a freshman, is a very promising talent.

If you are keeping score at home that is 8 Division 1 commits on the roster this year.  When all is said and done there are a few more D1 locks currently on the roster. Vivian Jungels, the Hendrickson twins, Roberts, Maxwell, and Jane Keuhl will be seeing their first Varsity action after coming off a season at 15A where they went 53-0 and won the state championship.  Edina just reloads every year!

Edina starts the year at Andover and then at Blake!  Seriously?!  The Hornets aren’t messing around by scheduling the two next best teams in the state to start the year.  Two next best?  Not sure that is even English but we are going to go with it.  We will have a very early indication how these teams stack up against each other.  Andover, even without Butorac, but with all of its young talent, will give Edina a great test in the first game of the year for both teams.  It is very likely that the Edina vs. Blake game is a preview of the Section 6AA final game at the end of the season.  The section final game last year was phenomenal.  The tilt on November 13th at Blake will be no different.

Upcoming….The Best of the Rest