You have to give Edina the nod as the two time defending Class AA State Champs.  But you can’t just hand them the trophy.  There are some other teams that will be right on their heels and give them a run for their money!  Let’s start with the obvious. 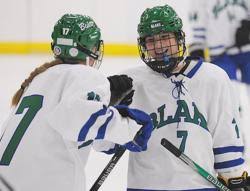 Blake is stacked!  Their top 5 forwards are as good as anyone in the state.  Depth will be an issue.  They lose their leading scorer in Sara McClanahan but there are plenty of goal scorers on that team to pick up any slack.  Junior and Cornell commit Lily Delianides has the quickest first 3 steps in the whole state and a deadly shot.  Senior and Cornell commit Izzy Daniel is an outstanding talent.  Great with the puck on her stick and equally as good with it not on her stick.  Fast with great vision.  Junior Addie Burton, who is a Minnesota commit, has been playing her best hockey as of late. Her great play started in Maine and it carried right over into Elite League and I don’t see why it stops anytime soon.  Minnesota commit and junior Audrey Wethington’s tenacity and motor is second-to-none.  Senior Maddie Tix is an underrated center whose talent would be appreciated more if she weren’t surrounded by her current teammates.

On the D side the goalie position is a giant question mark.  Who will step up?  You have Minnesota commit and senior Maddie Wethington at D.  Probably the best in the state.  Is she finally a senior?!  I feel like she’s been around for a decade!  Yale commit Grace Vojta and the very versatile Grace Johnson will help anchor the D group.

I don’t think there was a line in the metro last year that had more points than the Butorac-Hemp-Nelson line.  The million dollar question is can Gabby Krause and/or Bemidji State commit Paige Anderson step up and fill the void created by the graduation of Butorac?  Sophomore Peyton Hemp is Minnesota bound.  Junior Jamie Nelson is Mankato bound and sophomore Gabby Krause will play her college hockey at UMD.

They’ve got junior captain Kennedy Little anchoring the D along with underrated junior Ellie Tammi and sophomore Yale commit Maddie Clough.  It will most likely be a revolving door in net with Pelkey and Stumo splitting time.  Andover does not miss a beat with either of them minding the net.

It sounds like their starting goalie from last year, junior Penn State commit, Josie Bothun is taking the Maddie Rooney path and will be playing boys hockey this winter.  That is a huge loss.  Sophomore Colgate commit Rachel Golnitz is as good as any 2021 D in the state.  Junior D and Mankato commit Ellen Nelson isn’t far behind. Can Courtney Peterson come back and not miss a beat after having an extended amount of time off dealing with a broken back?  Breija Parent is highly underrated and will provide scoring up front.  Brooke Remington has great size, plays with an edge, and is very versatile.

Minnetonka is a bit of a head scratcher.  The talent is there.  There was not a single school that had more players at USA Hockey’s Maine camp this past summer.  Not Edina.  Not Blake.  Not anybody.  Junior captain, Minnesota commit, and USA Hockey World Champion Gold Medal winner Maggie Nicholson was in Maine for the second time.  Sophomore D and Cornell commit Rory Guilday was there.  Senior Captain and Holy Cross commit Kailey Langefels was there for the second time.  And junior forward and Boston University commit Lacey Martin was there. Those 4 were on a team that underachieved last season with a regular season record of 12-10-3 and lost to Shakopee in the section semifinals.  Take those 4 and add to them sophomore forward and Harvard commit Kayley Crawford and sophomore Cornell commit Brynn Dulac at goalie and you have some really nice pieces that should make for a much better 2018-2019.

The Breck Mustangs will start the year as the defending Class A State Champs.  But they play a very tough and primarily Class AA schedule.  They have Hill Murray, Roseau, Edina, Blake twice, Andover, Wayzata, and Maple Grove on the schedule this year.  Junior Quinnipiac commit Olivia Mobley will lead the charge.  She will get plenty of help from senior Holy Cross commit Carly Beniek, sophomore Minnesota commit Sadie Lindsay, junior Merrimack commit Allison Qualley, sophomore Minnesota commit Emily Zumwinkle, and goalie Uma Corniea.  Uma was the starting goalie in the state championship game last season vs. Warroad……….as a 7th grader!! She was as cool as a cucumber and had a smile on her face the whole game.  Breck has some young studs in Ava Lindsay, Elly Klepinger, Shae Messner, and Stella Retrum which will just ensure that they will be really good for a while.

Senior/Boston University commit Haylee Blinkhorn will be the straw that stirs the drink at Hill this year.  A 2000 birth year she was one of the final cuts from the 2018 USA Hockey U18 National Team.  She is coming off a season in which she had 38 points.  Senior/Merrimack commit Katie Kaufman and junior/Quinnipiac commit Nina Steigauf were both participants at USA Hockey’s Maine camp this past summer.  Senior/RIT commit Joslynn Olson and under the radar senior Gretchen Greeder will lead the defensive group.  Freshman Allie Franco, who is committed to Minnesota, comes over from Mahtomedi where she spent her 8th grade season stuffing the box score.  Freshman/Cornell commit Maddie Geer is an intriguing one to me.  She immediately stands out because I am certain she is legitimately 6 feet tall.  Then your second thought is “Wow, she moves really well.”  She needs to learn the game a little more but I am curious to see how she develops over the next 4 years.